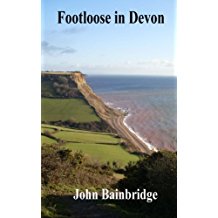 “The novelist John Bainbridge has walked in the Devon countryside for over fifty years, and is well known as a writer and broadcaster on the county.
In this miscellany of country essays, he explores many of the quiet corners of Devon, from the wild moorlands of Dartmoor and Exmoor to its spectacular coastline and peaceful pastoral landscapes.
John Bainbridge is the author of the country books The Compleat Trespasser and Wayfarer’s Dole.

“As a rambler, I’ve spent much of the past half century roaming through the Devon countryside, exploring the county’s quiet villages, winding footpaths and bridleways, lonely moorland and dramatic coast. I’ve had the privilege of leading walking groups to share what I know of this land. For much of that time I’ve also written and broadcast about Devon – in a number of books and many newspaper and magazine articles and for a local radio station. In fact, my first published work was an article about Dartmoor, written and sold when I was sixteen.

Devon has changed a great deal since I began my walks there – not altogether for the better. Ill-thought out development has blighted some of the countryside I knew. I salute those campaigners who are fighting to protect what remains. I spent nine years as chief executive of the Dartmoor Preservation Association, so I appreciate the hard work involved in saving the beauties for future generations to enjoy.

But even with all these changes there are still the quiet secret places there to discover, and what better way to seek them out than on foot? I’ve enjoyed my Devon walks, both alone and in the company of other ramblers.

I’ve written about Devon in my two earlier walking books Wayfarer’s Dole and The Compleat Trespasser, which give accounts of some of my longer walks.  But there are some shorter pieces I’ve written, many previously published as magazine articles, which didn’t fit into the themes of those titles – fugitive pieces which I thought might make a collection on their own, hence this little volume.

This is no definitive account of Devon, nor yet a walks guide, though there are snippets of history, legend and topography in the pages which follow. Footloose in Devon is rather a bedside book, a volume to be dipped into when the reader has a quiet moment.  I hope the places mentioned might inspire some rambles and expeditions into the heart of this very lovely county.”

2 thoughts on “Footloose in Devon”

'I Can See Ingleborough From Here!' - The ramblings of a Northern Fell Wanderer: and wanderer of fells everywhere.

New Tales from an Old Forest

Travel, History, Fiction and Dogs, Romania & South Africa ~ For what is wind, but the amassed power of words long ago uttered? (Patricia Furstenberg)

Paul Shorrock - One Man's Mountains AKA One Pillock's Hillocks

Having fun walking the hills

Rambling Journeys in Britain with John Bainbridge. Fighting for the Right to Roam. Campaigning to Protect Our Countryside.

Stories From Norfolk and Beyond - Be They Past, Present, Fact, Fiction, Mythological, Legend or Folklore.

Adventures from Dartmoor and beyond

These are a few of my favourite things.

Walks, stories and musings from the Lake District Fells

A good place to find out about the history of Inner London. There’s no fake-history on this Website.

I write about politics, nature + the environment. Some posts are serious, some not. These are my views, I don't do any promotional stuff and these views are not being expressed for anyone who employs me.

A diary of my life in rural north Suffolk.

Friends of the Ullswater Way Blog

Pathways to the Past

Exploring the legacy of Ethelburga - a community project focused on the Anglo-Saxon heritage of Lyminge, a village in the Elham Valley in East Kent.

Mystery Without Gore...Bio Historical with Love

Bee in the Moment

The Journal Of Antiquities

All about books, the people who write them, sell them and read them...reviews and news, travel and photography.

When out walking a new route, I often think about how, when I have completed the walk, I should look up and find out more information about some of the places I have seen. This does not actually happen as often as it should. Hopefully, this site will go some way to redressing this.

Someone's got to do it.

Family adventures around Britain in a small car

Stories and photos from Scotland

Welcome to the Beautiful North

The short-distance approach to walking a long-distance footpath.

A blog about Horror fiction, Horror writing, and Horror criticism...a continuation of The Horror at Open Salon

Exploring the countryside and lanes of Dorset

A photographic record of walks on Dartmoor and the surrounding areas

Down by the Dougie

“Beware those men, the jokers and the tricksters and the clowns. They will laugh us into hell.”